THE LIBERAL MEDIA MUST DESTROY SARAH PALIN & THEY MUST DO IT QUICKLY!

And… They are working double time to slander and spread lies about this popular Republican conservative leader. 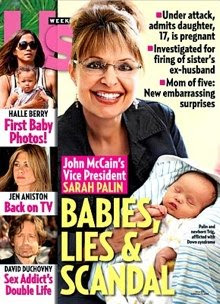 Us rag has Palin on the cover with headlines calling her a liar– something they made up out of whole cloth.
Michelle Malkin is reporting on the latest sexist liberal media attacks on Palin.

The McCain Camp fought back against the Democrats and the liberal media today with the more digs at Obama’s inexperience and flawed judgement.
The new McCain ad compares the popular Palin, who has an 80% approval rating, to the most liberal member of the Senate- Barack Obama:

Keep pounding away, Maverick!
It’s going to be a rough road ahead.

Ace has more on the media frenzy against Palin.

Meanwhile… The US is withdrawing troops from Baghdad.
The war is won…
But, the liberal media is too busy reporting on 17 year-old Bristol Palin.