After the addition of Governor Sarah Palin to the Republican ticket earlier this month, the Obama Camp sent out ads looking for “break your heart” teen actresses to play incest-rape victims for their anti-Palin (and McCain) ads.

Needs of the Many posted the ad that was sent out to actresses in the Las Vegas area: 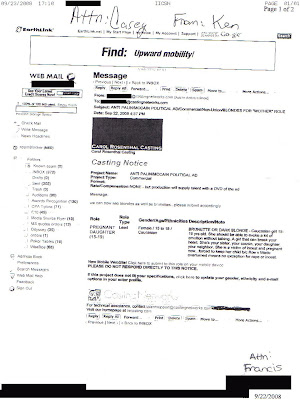 Here is the wording of the anti-Palin ad:

The actress should be 15-19, and “break your heart” without saying a word. Her role is that of a victim of incest or rape who is now pregnant, and “forced to keep her child b/c Roe v. Wade overturned means no exception for rape or incest.”

And, this is the candidate of hope and change?

By the way- McCain has made it clear that he supports abortion in cases of rape or incest. Governor Palin does not support abortion.

Previously:
Obama Campaign Looked For Rape Victims For Ads After Palin Was Nominated