That’s me and my posse… 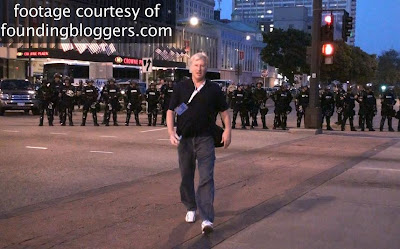 Click to Enlarge
After the Leftists tried to kill me and a busload of RNC delegates yesterday afternoon on the way to the Xcel Center it was comforting to see a police presence on the streets of St. Paul last night.

But, with several hundred radical Leftists bussed in from other states for the RNC convention the police still do not have enough force on the street- especially compared to Denver.

Also, these despicable punks are not afraid to attack and threaten women and elderly seniors.
If the police do not watch it, things will get much worse in St. Paul…
And, it’s already pretty bad.
The protesters are feeling confident– the anarchists (Leftists) are organized.
The situation is dangerous.

Click on this photo for video of the protests last night in St. Paul: 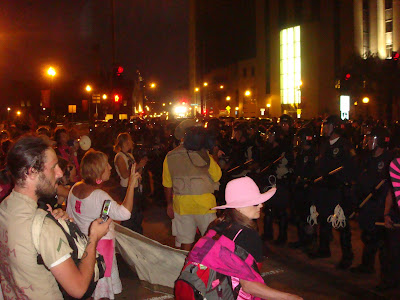 Founding Bloggers has more photos from the protests from last night including shots of the Macy’s store that was vandalized by the Leftist youths.