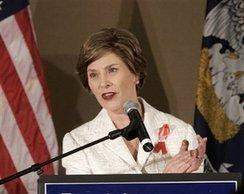 This was good advice from the popular First Lady.

First lady Laura Bush said today that sexism aimed at Sarah Palin was a very real prospect and suggested Democrats watch what they say about the Alaska governor and John McCain’s ticketmate.

“The other side will have to be particularly careful,” Bush said in an interview on Fox News from St. Paul, “because that’s something we all looked at.”

Questioned about whether Palin may face sexism from the media in the way Hillary Rodham Clinton supporters claim she did, Bush said: “I think that’s a possibility.”

The first lady, who had been planning to speak to the GOP convention tonight before Gustav scrambled the schedule, expressed pride in Palin.

UPDATE: Laura Bush and Cindy McCain were added to the speaker’s list at the RNC Convention for Monday Night.
They will be asking for donations for hurricane victims.