A Marine Corps lance corporal from Pennsylvania has sued U.S. Rep. John Murtha, saying the Democrat lawmaker slandered him by saying he and other marines killed 24 Iraqis in Haditha in “cold blood.” Justin Sharratt has filed the suit in federal court in Pittsburgh. In the lawsuit, Sharratt claims the comments Murtha made in 2006 about the Haditha killings also violated the Marine’s constitutional rights to due process and presumption of innocence. 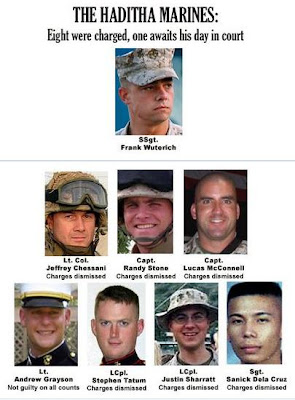 Photos via Defend Our Marines
John Murtha slandered the Haditha Marines when he gave several interviews after the inaccurate story broke in TIME Magazine saying that the US marines killed innocent civilians in cold blood.
Pittsburgh Live reported:

A lawyer for Lance Cpl. Justin Sharratt, 24, of Canonsburg on Wednesday announced plans to sue Murtha, D-Johnstown, for comments he made to news outlets concerning the November 2005 killing of about two dozen people in Haditha.

Murtha repeatedly said Sharratt and seven fellow Marines “committed cold-blooded murder of innocent women and children,” according to lawyer Noah Geary, who scheduled a news conference for 1:30 p.m. today to announce the lawsuit.

Here is a powerful ad running in Pennsylvania by William Russell who is challenging John Murtha this year for his House Seat:

You can donate to Russell’s campaign Here.
You can read more on the Haditha Marines Here.