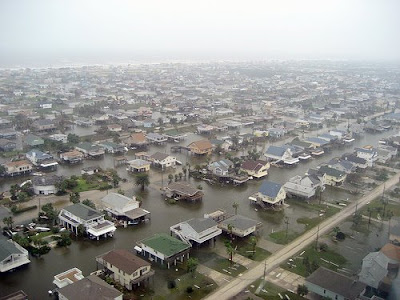 Texas is hit with one of its worst hurricanes in 100 years.
The death toll is at 32. 3,000,000 lost power in 5 different states.
Our friend Nahanni writes from the swamps of Texas to give us an update on this disaster from near Houston:

A major hurricane hits the 4th largest city in the country. 4 million without electricity, many without water or gas. Massive destruction on par with Katrina (there is a reason why they are not letting reporters into the west end of Galveston island and High Island-it is called “next of kin issues”). Whole communities gone.

I finally get power back after 2 days and go to see what is being said about this and what do I find?

Where is the MSM 24/7 coverage complete with anguished reporters weeping over the towns that have been washed away?

Maybe it is because Houstonians and Texans do not expect the federal government to do everything for them, they get out and “git ‘r done” and then help their neighbors get theirs done. They understand that it takes time for the state and the feds to move assets into a disaster area whereas the MSM thinks we have soopersekret transporter technology. The only ones whinging about FEMA are Sheila Jackson Lee, Nick Lampson who are doing so for political reasons and nothing else, one local reporter who is auditioning for MSDNC by trying to turn this into Katrina II and another local reporter with a very large ego who is whinging that they won’t let him into the west end of Galveston Island.

In my neighborhood the debris is almost cleaned up and what damage was done has been dealt with as best as possible given the lack of construction materials at the moment due to a temporary shortage of construction materials besides the claims adjusters need to come out to see it. All my co workers except one are at the same point and the one who isn’t can’t get back to his house yet because the roads are flooded. He has talked to his nextdoor neighbor and he says the house only lost some shingles and there are some trees down in the yard as far as he can tell.

Most of the stores are open with limited supplies and they are out of alot of things but one can deal with that. We all know it takes time. The HEB didn’t have any Bolillos this morning due to them being short of flour but I got some bagles and a nice loaf of Challah bread that will go splendidly with dinner.

Yes, I know I am luckier then most but there are very few people grumbling all in all. Some are ticked that they don’t have power back yet even though Centerpoint is busting it’s butt and in many places can not do anything until the downed trees are cleared and there are some that are pissed because they are not being allowed back into their homes because it is too dangerous to let them back there still. Not only is it a mess but there are snakes, alligators and really pissed off fire ants. And, of course, there are the very few who are whinging that they are not being put up at the Westin and aren’t getting their $2,000 FEMA gift cards. I am going to guess that most of them are former residents of New Orleans judging by their accents.

One thing that does help that it is a gorgeous day here-cool and with a wonderful breeze and it is supposed to stay this way all week.

Thanks, Nahanni. Hang in there.
…Glad you are OK.

And, Patrick sends this from Ohio:

I thought you should know that power is out in most of Central Ohio, and Cincinnati. The wind got up to 76 Mph here, I am lucky to have power but if the pole out front falls I will lose power, the local news is saying it will take up to a week for all power to be restored.