Hurricane Ike is being blamed for at least 15 deaths in the Midwest.

The St. Louis metro east area issued a boil order for some customers in its district. 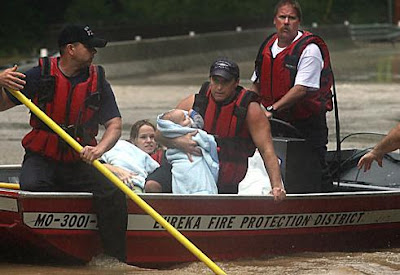 Water rescuers from the Eureka Fire Protection District take a family to safety after fetching them from a roof on Overbrook Drive in Ladue. (Robert Cohen/P-D)

At least 2 people were killed in St. Louis as Hurricane Ike swept through the region on Sunday. One person is still missing.
STLToday reported:

A Ladue woman was killed when a tree limb struck by lighting fell on her. Joan Dankner, 49, was outside her house in the 9600 block of Ladue Road. The wife and mother of three was pronounced dead at St. John’s Mercy Medical Center in Creve Coeur.

And in University City, a man was found dead behind a home with a flooded backyard in the 1100 block of Wilson Avenue. Authorities suspect the elderly man drowned. His name has not been released.

The powerful storm dumped as much as 6 inches of rain on the St. Louis area before relenting.

About 30,000 AmerenUE and AmerenIP customers in the St. Louis area are expected to wake up today without power. The utility company said power should be restored to all customers by tonight. The storm had knocked out service to 106,000 customers Sunday morning…

Rainwater covered two runways Sunday at Lambert-St. Louis International Airport. Flights were delayed as planes were rerouted to the airport’s other airstrips. The runways were open by early afternoon.

Flooded rail lines combined with a power outage shut down MetroLink, but limited service was restored by midday, including shuttling riders by bus from East St. Louis to downtown.

The storm also stranded some people in their homes or cars. At least six people were rescued from their homes in Ladue on Overbrook Drive, which is adjacent to the Old Warson Country Club.

The storm caused flash flooding in the St. Louis region on Sunday. 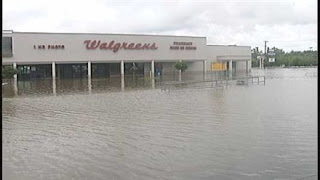 Rescue crews had to save workers at this Walgreens in Florissant, Missouri, a suburb of St. Louis. (KSDK)