Sarah and Todd Palin landed in Fairbanks, Alaska tonight after a very exciting two weeks in the lower 48 (or is it 56 or 55?).
She left a very popular reformer and governor with an 80% approval rating.
She returned home a hero.

The crowd at the Fairbanks airport greeted her like a rock star:

They love her in Alaska.

Palin and McCain held a rally in Farifax, Virginia earlier today.
Here’s one of the signs: 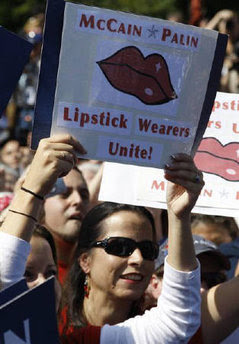 Meanwhile… The first Congressional ad with Sarah Palin was released today by a Republican candidate in Alabama.

And, liberal writer Rebecca Johnson is blown away by Sarah Palin.