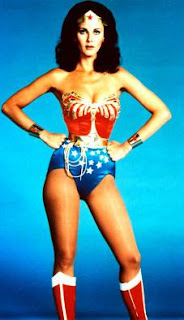 “I think America should be afraid.”
…Because Palin of Palin’s (misrepresented) Christian beliefs.

Don’t get me started. She’s the anti-Wonder Woman. She’s judgmental and dictatorial, telling people how they’ve got to live their lives. And a superior religious self-righteousness … that’s just not what Wonder Woman is about. Hillary Clinton is a lot more like Wonder Woman than Mrs. Palin. She did it all, didn’t she?

No one has the right to dictate, particularly in this country, to force your own personal views upon the populace — religious views. I think that is suppressive, oppressive, and anti-American. We are the loyal opposition. That’s the whole point of this country: freedom of speech, personal rights, personal freedom. Nor would Wonder Woman be the person to tell people how to live their lives. Worry about your own life! Worry about your own family! Don’t be telling me what I want to do with mine.

I like John McCain. But this woman — it’s anathema to me what she stands for. I think America should be very afraid. Very afraid. Separation of church and state is the one thing the creators of the Constitution did agree on — that it wasn’t to be a religious government. People should feel free to speak their minds about religion but not dictate it or put it into law.

What I don’t understand, honestly, is how anyone can even begin to say they know the mind of God. Who do they think they are? I think that’s ridiculous.

It’s just too bad that this former heroine is not better informed.
She sounds like a deranged and misinformed Daily Kos reader.