Friends of Obama kept Sarah Palin from speaking at the anti-Ahmadinejad rally. 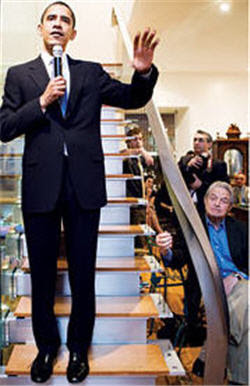 Last week, Hillary Clinton reneged on a commitment to speak at the anti-Ahmadinejad rally at the UN after learning that Republican Vice Presidential candidate Governor Sarah Palin would also speak at the rally. Senator Joe Biden also refused to speak at the rally. Democrats offered to send Florida Representative Robert Wexler who had previously said that the choice of Governor Palin as VP candidate was an insult to the Jewish people.
That was nice.

But, in the end it didn’t matter.
Members of a George Soros organization were able to collect 20,000 signatures in 24 hours to demand that Sarah Palin not speak at the UN rally against Ahmadinejad and she was disinvited.

The National Jewish Democratic Council took credit for nixing the invitation. And the leftwing J Street crowed over its victory: “We collected over 20,000 signatures in 24 hours asking Iran Unity rally organizer Malcolm Hoenlein to take Sarah Palin off the schedule for Monday’s rally, and he caved to our pressure on Thursday afternoon citing the fact that the rally had become too partisan.” They made clear that they viewed this as a victory for precisely the policy which Barack Obama favors: “smart diplomacy.”

(MoveOn.org’s financier and godfather George Soros was an initial backer of J Street. Its board of advisors contains notable leftwing activists such as Matt Stoller, who previously blogged for Ned Lamont’s senatorial campaign and the netroot MyDD website, and Eric Alterman of the netroot attack group Media Matters, who recently was exposed for suggesting that a column on ABC News’ website was influenced by its Jewish reporter’s affiliations with other Jewish journalists. It also contains individuals such as Robert Malley, who served as an informal advisor to the Obama camp but was dismissed after his negotiations with Hamas were revealed.)