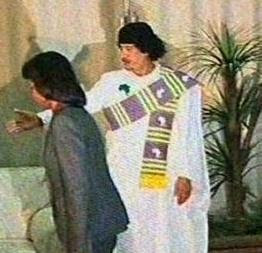 Libyan tyrant Gaddafi welcomed Secretary of State Condoleezza Rice to his tent this week. Rice was the first U.S. secretary of state to visit Libya in more than 50 years. The eccentic leader was very very excited to meet the “darling black woman, mistress of the slaves.”
The State Department reported:

QUESTION: Okay. So you met with leader Qadhafi. And obviously, it was interesting walking in the room. You had the incense and the white pomp and circumstance, and then there was the brawl that the press was involved in. But when all was said and done, what was your impression of him?

SECRETARY RICE: Well, it was interesting. I didn’t know what to expect. Once we were into the discussion, it was, frankly, a pretty normal diplomatic exchange about Africa and about the U.S. role there and about the Middle East and problems in the Maghreb and his vision for how Africa ought to emerge – many of the things that I already read that he was interested in, but he went into more detail. So quite frankly, the exchange was pretty normal.

QUESTION: Now, I have to do this just because everyone’s talking about it and it’s in all the headlines and people are using words from it. But he appears to be interested in – he likes to muddy the waters, he likes to make a big splash, and he was excited you were coming. And expressed it in a rather bizarre way on Al Jazeera. He said, “She’s coming, I’m so excited, that ‘darling black African woman, mistress of the Arab slaves.’” And I’ll be honest; I’m not exactly sure what that means.

QUESTION: It seems rude, but do you cringe? Do you get angry? Do you laugh? I mean, what do you think when you hear those things?

SECRETARY RICE: First of all, he told me that he was certain that I had African ancestry – I clearly do – and that he was just very proud that there was an African American woman in the White House, and I think he (inaudible) in the State Department. It’s fine. It didn’t interfere with our discussion in any way.

QUESTION: So he seems – he’s sane? He’s someone you can deal with?

SECRETARY RICE: Well, he’s someone who has made important strategic choices for his country that have made us, I think, safer in giving up weapons of mass destruction, in renouncing terrorism. Look, this isn’t going to be an easy relationship. It has a lot of history to overcome. We’ve tried to overcome some of that by getting an agreement that will compensate the victims of terror. One reason that I was not here two years ago or even a year ago was because we wanted to have that agreement in place. So he’s made important decisions, and it’s a good thing that the United States and Libya are trying to build a constructive relationship because there are a lot of problems that Libya is very critical to resolving.

Gaddafi could never make it in US politics.
He would have way too much trouble with the David Patersons of the world.