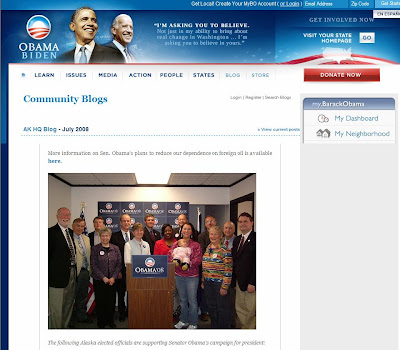 Hollis French (fifth from left) and fellow Troopergate hack Kim Elton (on left with beard) who has donated to the Obama Campaign sit on the panel investigating popular governor Sarah Palin.

Governor Palin fired former public safety director Walt Monegan for several incidents of insubordination.
Hollis French and Monegan are close friends.
On his resume French states that he served in the Marine Corps: 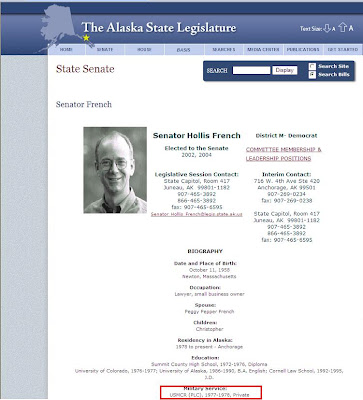 However, this does not appear to be accurate.

Hollis “Gunny” French (D)— is guilty of misrepresenting that he served in the Marine Corps – when in fact his ONLY exposure to the Marine Corp was attending a Marine ROTC PLC – from which he was DISMISSED and granted a “Discharge” as a Private.
–He NEVER attended, much less graduate from either of the USMC Boot Camps.
–He FAILED to pass the ROTC Platoon Leader Course – thus failing to make the grade to become a Marine Officer.
–Hardly service as a Marine, and the folks in Alaska caught up with French’s claims….
–Folks in Alaska to this day, still jokingly refer to the jackass poseur as “Gunny French” and he hates the reminder of his lie –Free Republic.

The lead dog on the Troopergate smear campaign has a little explaining to do himself. On his official State of Alaska website he claims to have been in the Marine Corps Reserve in 1977-78 as a private. There is also a reference to PLC or Platoon Leader’s Course. As a former Marine, this smells fishy. In another story French claims he spent six weeks at Quantico, VA. As every Marine knows, Quantico is where Marine officer training occurs. For French to have been a Marine private he would have had to complete basic training at either Parris Island or San Diego, which takes about three months. I also did a military.com search of Hollis French and came up empty. For Hollis French to claim to have been a Marine Reservist is stretching the truth and an insult to all Marines, past and present.

French listed his service as “USMC (ROTC) 1977-1978,” which he later explained was six weeks training at the Quantico, Va., Marine Corps base. French said most people saw his military record as a non-issue and he never tried to make it out as anything more or less than was stated in the pamphlet.

This letter from 2002 was posted on French at Free Republic:

I take special note of those politicians and candidates that inflate or add false information to their resume by misrepresenting themselves to the public just for a vote.

The political resume of Hollis French that was listed in the Sunday Anchorage Daily News said that he has military service in the U.S. Marine Corps ROTC, 1977-78. This is misleading. A student in the ROTC program is not in the military, nor is it counted as any such service. I am guessing, the most Mr. Hollis did in ROTC was to take a few ROTC college courses, maybe he was washed out after a year, and he wants the public to believe that ROTC constitutes as military service. It is not.

The ROTC program is also available to students in high schools around the nation. Does Mr. French want the public to believe that those students also had service in the military?

Hollis’s misrepresentation is a dishonor and disservice to all servicemen and women that truly served, as well as to the public he wishes to serve.

The media has the responsibility to inform the public of the truth. When gathering information, media reporters should understand what constitutes military service and report it accurately

Hollis French is not just a liberal political hack with an ax to grind and an Obama supporter…
French is a phony soldier.