The Left’s response was predictable… 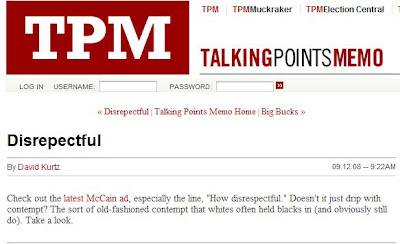 Today it was Talking Points Memo that suffered the meltdown:

Check out the latest McCain ad, especially the line, “How disrespectful.” Doesn’t it just drip with contempt? The sort of old-fashioned contempt that whites often held blacks in (and obviously still do). Take a look.

No, actually it brings attention to the nasty liberal attacks on Sarah Palin.

Well it has been a couple of days since “community organizer” was labeled a racist term, so we were about due.
Hat Tip Larwyn

Will any Republican — anywhere — condemn the sleaze that the McCain campaign is cranking out on a now-daily basis?

The McCain campaign issued a new ad today that runs through the ways that Obama has supposedly lashed out at Sarah Palin. It actually concludes with a woman saying, in a tone of a matron chiding an uppity black servant, “how disrespectful.”

The McCain camp has also released an ad suggesting that Obama is a predator and Palin is her prey. And it launched a spot pairing shots of a leering Obama with talk about sex and children.

Any Republicans out there have a problem with this type of stuff?

Here’s a tip to Talking Points–
Many Republicans and Independents do not suffer with disproportionate levels of white liberal guilt.
The same lines that may work on the Democratic base won’t always work so well with independents and Republicans.
Hat Tip D Martyr