Of course this connection has been reported here several times but it looks like there’s finally a crack in the media wall of silence surrounding Barack Obama and his close terrorist friends. 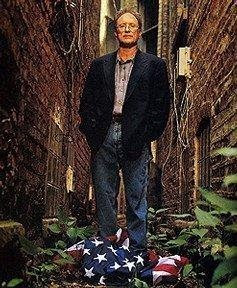 Former Weather Underground terrorist and Obama associate Bill Ayers stands on the US flag for a Chicago Magazine 2001 article titled “No Regrets.”

Austin Fenner at the The New York Post reported today:

While Barack Obama has long downplayed his connection to Bill Ayers, a co-founder of the violent Weather Underground radical group, new documents show the two worked much more closely together in starting an educational foundation than has been previously known.

Recently released board-meeting minutes for the Chicago Annenberg Challenge show the two were present together at least six times in 1995 as the foundation’s members discussed how to organize and operate the project, which was Ayers’ brainchild.

Obama has always acknowledged he and Ayers both worked at the foundation, but has insisted they never had more than a passing acquaintance.

When asked by The Post how closely he worked with Obama, Ayers twice said, “It’s in the public record.”

In the Vietnam era, the Weather Underground conducted a series of bombings of official sites. Ayers wrote in his 2001 memoir, “Fugitive Days,” that he helped with the bombings.

You better watch your back, Austin.
The Goon Squad is watching!

WHAT exactly does a “community organizer” do? Barack Obama’s rise has left many Americans asking themselves that question. Here’s a big part of the answer: Community organizers intimidate banks into making high-risk loans to customers with poor credit.

In the name of fairness to minorities, community organizers occupy private offices, chant inside bank lobbies, and confront executives at their homes – and thereby force financial institutions to direct hundreds of millions of dollars in mortgages to low-credit customers.

In other words, community organizers help to undermine the US economy by pushing the banking system into a sinkhole of bad loans. And Obama has spent years training and funding the organizers who do it.

There’s much more on Brack Obama’s radical past.