** HERE ** IS THE AUDIO-VIDEO FROM THE CONVERSATION WE HELD WITH THE VICTIM!

Code Pink published a report on their interruption of the Sarah Palin speech on Wednesday night. Marxist member Medea Benjamin and Top Obama Bundler Jodie Evans were dragged out of the Xcel Center without much disruption. From the other side of the stage (where I was sitting) you did not even know they had tried to sabotage Governor Palin:

Co-founders Medea Benjamin and Jodie Evans, who were given their tickets to the speech by a Republican delegate who was frustrated with the Republican party and Sarah Palin, caught the attention of Palin with their banners and shouting about 15 minutes into her speech. Palin stopped talking for a moment to turn to look at them. (Read a Washington Post description of the incident here: http://voices.washingtonpost.com/the-trail/2008/09/03/inside_the_convention_hall.html).

Jonn Lilyea did some investigating and discovered that Top Obama supporter Jodie Evans was wearing the name tag of alternate delegate Annie Eckrich from Indiana: 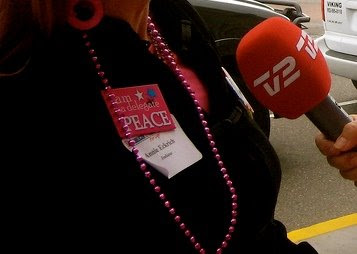 This Ain’t Hell has more on Eckrich saying she is an alternate delegate and RNC contributor.

We just got off the phone with Annie Eckrich from Indiana.
She was at the convention each day.
She DID NOT GIVE CODE PINK PERMISSION TO USE HER IDENTITY!
CODE PINK STOLE HER IDENTITY!!!
Annie was very upset that the radical antiwar group stole her identity. She was not familiar with the Code Pink movement. She has no idea how they came across her name.

UPDATE: Annie Eckrich wrote the following comment below after our conversation:

I am Annie Eckrich and have no connection to these people what so ever. As I see the name tag, I missed 2 programs and they may have had a name tag with my name,but none of my credentials as they were only with me at the convention. Please be assured that I have been tried and true Republican since I was 18 years old.

UPDATE 2: Code Pink founder Medea Benjamin explained in an interview how she got in the RNC Convention, via Michelle Malkin:

We’d been asking around if anbody had extra passes… Just an hour before we got in there someone said, “Oh, I’m not going back in. Here’s some credentials.”

UPDATE 3: There may be an MSNBC connection.

Jim Hoft
Jim Hoft is the founder of The Gateway Pundit, one of the top conservative news outlets in America. Jim was awarded the Reed Irvine Accuracy in Media Award in 2013 and is the proud recipient of the Breitbart Award for Excellence in Online Journalism from the Americans for Prosperity Foundation in May 2016.
Former Obama Speechwriter Mocks Media's Sham Narrative that Kamala Harris is a Moderate (VIDEO)
Garbage DC Website Known for Promoting Conspiracies Attacks Gateway Pundit After Crashing White House Press Corps Coven
Two Boys Robbed at Gunpoint at Their Lemonade Stand in Peoria, Illinois (VIDEO)
EPIC VIDEO: President Trump Accepts Endorsement of NYC Police Officers Union in Bedminster Ceremony
Patriotic President Donald Trump Donates Part of His Salary to Restore and Repair National Monuments
See more...