CBS jumped out of the gate first this week in attacking Alaska Governor Sarah Palin…
The news organization of Rathergate fame promises–
“The Sarah Palin Phenomenon Is Doomed.” 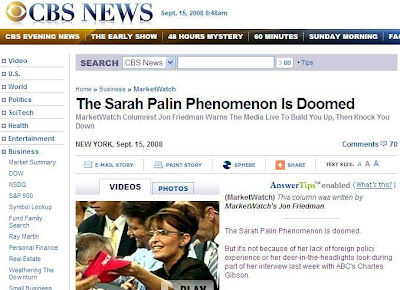 CBS reported this Monday morning that the “Palin Phenomenon” is Doomed because the media will soon get bored with it.

Got that?
The excitement over Sarah Palin is a all media driven according to CBS.
That’s it!…It’s just a media driven circus!
Because, you know, the media has been so generous with their coverage of Sarah Palin. They adore her… So does Hollywood.

The media sure is having a difficult time trashing America’s most popular governor.
But, that hasn’t stopped them from trying.