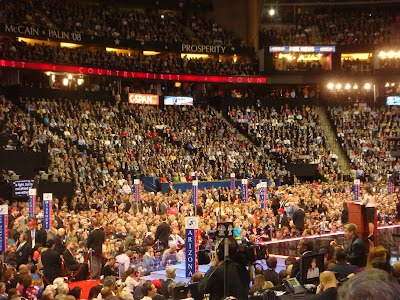 Rudy Opens Up…
HOCKEY MOM SARAH PALIN KNOCKS IT OUT OF THE PARK!
Man, She Was Good!
Here are a few of her better lines from down near the floor of the Xcel Center tonight where it was electric:

It’s hard to see, but when Palin said she was not going to be in Washington to impress the mainstream media but to work for the people, the crowd started booing and pointing at the media dogs in a front row of seats near the convention floor.
It was awesome.

Here is the text of her speech.

Barack, who?
John Hinderaker live-blogged the exciting night from the Xcel Center.
Glenn Reynolds has a great roundup on Palin’s night.
Michelle Malkin reports that the liberal men- and liberal women- are in a panic.
Ed Morrissey called it a knockout!
Drudge headlines “She did it her way!”
Ann Coulter says the best man turned out to be a woman.
Bob McCarty posted Sarah Palin’s Top 20 Jabs.
Also, it wasn’t obvious but the teleprompter operator tried to derail Palin.
Jules Crittenden has a roundup on reaction.

Clinton aides are saying the the Palin treatment by the media is sexist.
No kidding.