Anarchists in St. Paul attacked RNC busses today en route to the Excel Center.
The anarchists and Leftists knew when the busses would be heading to the convention and were waiting for them.
They nearly killed us!

The anarchists and antiwar nuts were protesting on top of the interstate overpasses earlier in the day. 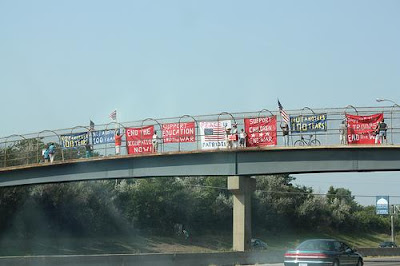 Later when the GOP busses started to take delegates from Minneapolis to St. Paul the anarchists started throwing sandbags and cement bags at the busses.
Unreal.

The bus I was riding was hit with cement bags that the anarchists were throwing off the overpasses down on the interstate. The anarchists missed the bus in front of us and nailed our bus with a direct hit.

The police had us slow down and then sent us under the interstate overpass when we were attacked.
There were several women and senior citizens on the bus.

UPDATE: Atlas Shrugs covered the massive anarchist riot outside the Excel Center this afternoon and has a couple amazing shots! 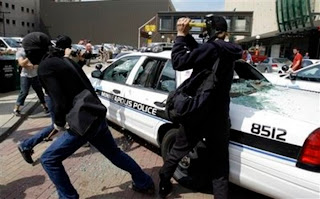 They were protesting war.

UPDATE 3: The American Thinker has a photo of another bus that was attacked today.