Bummer. Berkeley Tree-Sitters Will Be Fined Big $$$ In Legal Fees

The deranged tree-sitters cost the university over $800,000 for their 22 month stunt.
Now the moonbats will pay. 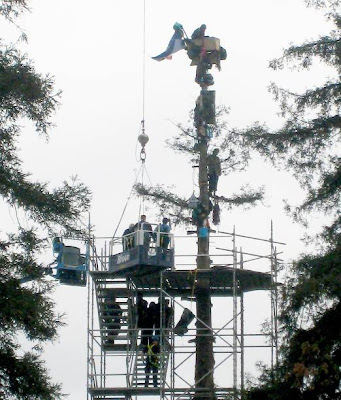 The last day of the protest alone cost UC Berkeley $40,000.
Zombie and Protest Shooter have photos from the final day of tree-sitting.

The lawyer for the tree-sitters says the university is being vindictive.
SFGate and Lucianne reported:

Berkeley’s infamous tree-sitters have been hit with a rude surprise since they came down to earth: Judges are socking them with thousands of dollars in fines and legal fees.

Ironically, much of the money – which could total more than $10,000 per sitter – is going straight to the University of California, the very institution the tree-sitters were protesting as they tried to save a grove of trees outside Memorial Stadium.

“It’s really vindictive,” said an attorney for some the sitters, Dennis Cunningham. “They don’t have this kind of money.”

“We’ve asked the judge to throw the book at them,” Goldstein said flatly.

UC Berkeley estimates it spent more than $800,000 on police and other security measures during the 22 months sitters were up in the trees. The university spent $40,000 alone on the scaffolding that went up around the final tree during the last day of the protest this month.