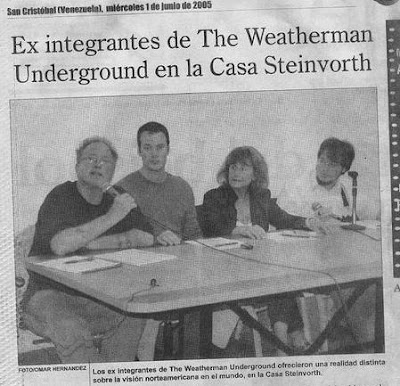 Bill Ayers and his wife Bernadine Dohrn made headlines in Venezuela in 2005. (Flickr)

Today it was reported that not only were terrorists Bill Ayers and Bernadine Dohrn cavorting with America’s enemies during wartime, but they were given rings from the North Vietnamese made from US planes shot down over Vietnam.
Scott Swett and Roger Canfield have this shocking report today at American Thinker:

Even before Weatherman began its notorious bombing campaign, the group’s future leaders had formed relationships with others who shared their hatred for “Amerikkka.”

Bernadine Dohrn made numerous contacts with Fidel Castro’s Cuban Mission at the UN in 1968 and 1969, during which time she arranged for SDS groups to visit Havana.

After returning from Cuba, Dohrn and others met with North Vietnamese and Viet Cong representatives in Budapest, Hungary, to discuss antiwar strategy on US campuses. Speaking a few days later at an assembly of revolutionary student movements at Columbia University, Dohrn reported that the Vietnamese communists she met in Budapest were working with US GIs in Saigon, attempting to obtain military information.

As a gesture of solidarity, the Vietnamese who Dohrn met in Budapest presented her with a ring made from an American aircraft shot down over North Vietnam. Bill Ayers would receive a similar ring while meeting with Vietnamese communists in Toronto. He later recalled being so moved by the gesture that he “left the room to cry.” He said, “I realized…America was an evil… and that I was… living inside the belly of the beast….”

Isn’t it comforting to know that these terrorists launched Barack Obama’s career?

UPDATE: Obama must have learned something from all of his time with Ayers.
Today, The One is trying to silence another journalist who dared to write something negative about him.