On March 6, 2007, Nicholas D. Kristof at the New York Times wrote an article about Barack Obama’s upbringing, “Obama: Man of the World,” where Obama discussed his Muslim upbringing in Jakarta:

“I was a little Jakarta street kid,” he said in a wide-ranging interview in his office (excerpts are on my blog, www.nytimes.com/ontheground). He once got in trouble for making faces during Koran study classes in his elementary school, but a president is less likely to stereotype Muslims as fanatics — and more likely to be aware of their nationalism — if he once studied the Koran with them.

Mr. Obama recalled the opening lines of the Arabic call to prayer, reciting them with a first-rate accent. In a remark that seemed delightfully uncalculated (it’ll give Alabama voters heart attacks), Mr. Obama described the call to prayer as “one of the prettiest sounds on Earth at sunset.”

Moreover, Mr. Obama’s own grandfather in Kenya was a Muslim. Mr. Obama never met his grandfather and says he isn’t sure if his grandfather’s two wives were simultaneous or consecutive, or even if he was Sunni or Shiite.

The article was published on March 6, 2007, but as John Galt reported, it’s now missing.
It was removed from the NY Times website.

It’s interesting then that it’s still posted on the Obama website: 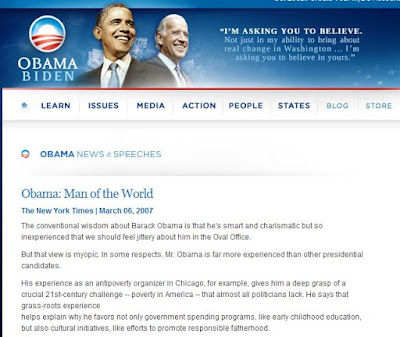 You’d think they’d be more coordinated with their defensive tactics.

UPDATE: It looks like the NY Times link is working again.