ABC’s Charles Gibson distorted Palin’s church prayer then tells her that it was an exact quote.
Gibson lectured Sarah Palin:

GIBSON: You said recently, in your old church, “Our national leaders are sending U.S. soldiers on a task that is from God.” Are we fighting a holy war?

PALIN: You know, I don’t know if that was my exact quote.

But what Abraham Lincoln had said, and that’s a repeat in my comments, was let us not pray that God is on our side in a war or any other time, but let us pray that we are on God’s side.

GIBSON: I take your point about Lincoln’s words, but you went on and said, “There is a plan and it is God’s plan.”

“Pray for our military men and women who are striving to do what is right. Also, for this country, that our leaders, our national leaders, are sending [U.S. soldiers] out on a task that is from God,” she exhorted the congregants. “That’s what we have to make sure that we’re praying for, that there is a plan and that that plan is God’s plan.”

That is significantly different than what Gibson claimed as he talked down to Sarah Palin.
HotAir reported last week on Palin’s actual words that were distorted by Gibson.

Tom Maguire says sign me up for the Sarah Palin fan club.
Ace saw no gaffes.
Glenn Reynolds has a Palin roundup.

UPDATE: The mainstream media continued their attempt to destroy Sarah Palin’s reputation tonight–
The AP smeared Palin in its review of the interview: 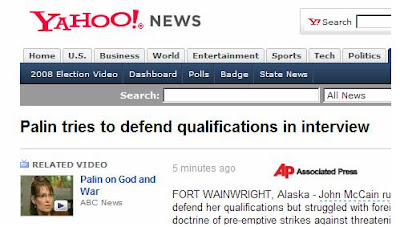 Unreal!… Did they ever once drill the community organizer on his qualifications?
Has the media ever been so disrespectful to a governor? Or, is this just because she’s a woman governor?
This is disgusting.
And, of course they omit that she also held a state post and chaired the Alaska Oil and Gas Conservation Commission from 2003 to 2004 before she became governor.