Even with the many arrests, protesters kept the police busy all week at the RNC Convention. 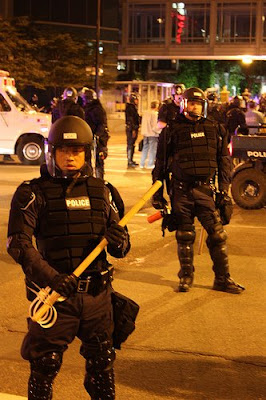 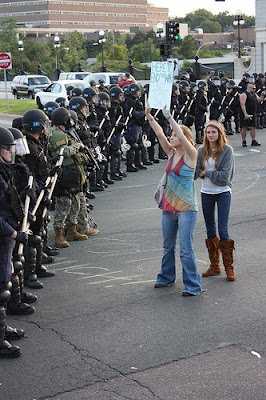 The protesters in St. Paul were out in force all week. (Founding Bloggers)

David Guy McKay, 22, and Bradley Neil Crowder, 23, both currently of Austin, are each charged with one count of possession of firearms that were not registered to them.

The two men born in Midland, according Ramsey County, Minn., arrest reports, were in custody following an initial court appearance Friday. Both have misdemeanor arrests in Midland County, records show.

A court hearing is scheduled for Tuesday in Minneapolis. It was not immediately clear if they had attorneys. If convicted, the pair could each face up to 10 years in prison.

According to the criminal complaint, law enforcement officers overheard a conversation through electronic surveillance in which McKay said the Molotov cocktails he and Crowder made would be thrown at vehicles parked in a St. Paul lot. The lot was used by law enforcement, and patrolled by U.S. Secret Service and the military.

“It’s worth it if an officer gets burned or maimed,” McKay was heard saying, according to federal authorities.

McKay and Crowder allegedly belong to an organization known as the Austin Affinity Group.

The two domestic terrorists brought a rental trailer full of weapons with them from Texas:

Authorities say members of the group traveled from Austin to Minnesota on Aug. 28, pulling a rental trailer that contained 35 “shields” crafted from stolen traffic barrels. The shields, confiscated by authorities, were outfitted with protruding screws and were meant to be used as “offensive weapons,” officials said.

McKay and Crowder allegedly bought supplies for constructing explosive devices at a Wal-Mart in St. Paul.