Yesterday, we posted video of Vets For Freedom founders Pete Hegseth and Dave Bellavia crashing the antiwar, anti-military “Bush Legacy” bus.
The anti-Bush exhibit is traveling the country promoting an insurgent snuff film of an attack on US soldiers.
Here is the video– Click on the photo: 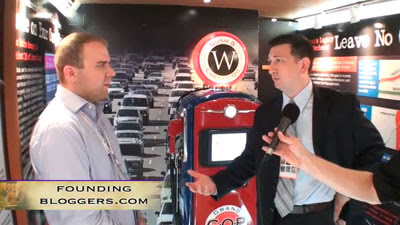 The director of communications of the “Bush Legacy” bus was nearly in tears after the pro-American, pro-Victory veterans confronted him on the insurgent filth that the bus is promoting.

Well… We obviously hit a nerve because late last night, the curator of the Soros-funded propaganda bus, Jeremy Funk (who appears in the video) posted a comment to the original thread for this video.
Here is his comment:

I’m the “loser” that with the “irrational rage” and “lack of objectivity” and “bottled-up anger” in the video. Here I thought I had I given an Iraq War Veteran the utmost respect he deserves. Here I thought I treated him like the hero he is. Here I thought I was respectful, conciliatory, humbled, and open-minded to his opinions.

But, personal stuff aside, it boils down to serious a difference of opinion. Like the majority of the American people, I don’t want to see one more of our brave men and women dying in the crosshairs of an Iraqi civil war. I don’t want to see another mother suffer, like the mother of Sgt. Patrick R. McCaffrey. Sgt. McCaffrey’s mother reached out to us with her son’s story of how the Pentagon lied to her about her son being killed by the same Iraqi forces he was training. She donated his combat boots to the Bush Legacy Bus in hopes that not another mother would feel the same pain and betrayal.

I want our troops to come home from Iraq as quickly and responsibly as possible, and I want the eye back on the ball in Afghanistan where the real threat is – where the terrorists that actually attacked us on 911 are thriving once again. Even Ambassador Ryan Crocker admits that Afghanistan, not Iraq, is the central front against Al Qaeda: http://www.youtube.com/watch?v=EH57bOZbJ3o

We’ve heard a lot from the “liberal media” you folks decry so much about the so-called “success” of the “surge.” The reality is, civil strife is still flaming every day: just one example this week, a suicide bomber killed 28 police recruits in Quaragh Tappah:
http://www.reuters.com/article/worldNews/idUSLP67913620080826

But you probably didn’t hear about that or any of the other deadly civil bombings this week or last or the week before. Certainly, the increased troop presence has helped decrease violence on U.S. forces, thank God, but terrible Shiite on Shiite violence continues every day, and a good deal of the overall decrease in violence is credited to a cease fire agreement, albeit a fragile one, between radical Shiite Muslim cleric Muqtada Sadr and Shiite Iraq PM Maliki.

Shiite on Shiite violence has been nothing new. And, in the last several months, the U.S. government has taken one side of a bloody, religious, sectarian civil war – spending $12 billion a month and many U.S. dead and wounded in the process. That’s where Veterans for Freedom/John McCain and Americans United for Change, the American people, and the Iraqi government disagree. VFF and McCain want to keep our soldiers in harm’s way of a civil war indefinitely until they achieve some undefined, unattainable “victory” whether it takes 100 years or more. But, our troops have already done everything they’ve been asked to do and a lot more serving 2-3 or more tours. My best friend Dan Burke is in Iraq right now serving a second tour.

Now that the Iraqi parliament and PM Maliki have publicly called on us to leave and are close to a deal with the U.S. government for a timetable for withdrawal, it’s time that Vets for Freedom and John McCain of 2008 concur with the John McCain of 2004 who when asked what he would do if a sovereign Iraqi government asked us to leave said: “it’s obvious that we would have to leave because — if it was an elected government of Iraq, and we’ve been asked to leave other places in the world. If it were an extremist government then I think we would have other challenges, but I don’t see how we could stay when our whole emphasis and policy has been based on turning the Iraqi government over to the Iraqi people.”: http://www.democracyarsenal.org/2008/07/in-2004-mccain.html

Even President Bush has agreed to “time horizons” and his administration is reportedly set to agree to a status-of-forces agreement with Iraq that begins the safe and orderly withdrawal of most U.S. troops by the end of 2011. While stomping about the Bush Legacy Bus and complaining about our fact-based Iraq exhibit, I didn’t once hear Veterans for Freedom call President Bush a “traitor” or a “cut and runner.” Why not?

Of course, if Jeremy and the staff of “Bush Legacy” bus wanted to give the veterans “the respect they deserve” they’d TAKE DOWN THEIR FILTHY INSURGENT SNUFF FILM!

And, if they really wanted respectful dialogue they would accept the undeniable truth that the Bush Surge worked, that violence is down to record levels, that the benchmarks are being met, and the war is being won.

But first they’d start by TAKING DOWN THEIR TERRORIST FILM!
What a disgusting shameful bunch.