Unbelievable– Obama Doubles Down On His Air Energy Plan 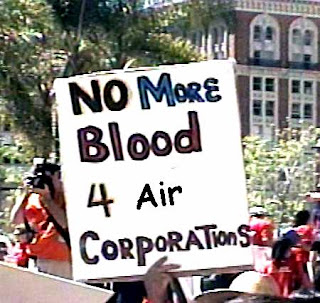 Barack Obama went there with his air energy plan again. Crazy, no?
How can this guy be considered a viable candidate?
Jake Tapper reported:

“You know the other day I was in a town hall meeting and I laid out my plans for investing $15 billion a year in energy efficient cars and a new electricity grid and somebody said, ‘well, what can I do? what can individuals do?’ Obama recalled.

Nedra Pickler fact-checked the contention by Democratic Sen. Barack Obama that “Making sure your tires are properly inflated, simple thing, but we could save all the oil that they’re talking about getting off drilling, if everybody was just inflating their tires and getting regular tuneups. You could actually save just as much.”

Except she did not check any of the facts. The story is here.

Except most people already have their tires inflated properly. So the net savings would be smaller.

Figure 30% of the people will inflate their tires. That brings the savings to 90,000 barrels a day.

Or less than ½% of the 20 million barrels consumed each day.

That 90,000 barrels is a far cry from the 1 million to 2 million barrels a day expected from offshore oil.

Obama’s statement — “Making sure your tires are properly inflated, simple thing, but we could save all the oil that they’re talking about getting off drilling, if everybody was just inflating their tires and getting regular tuneups. You could actually save just as much” — is ridiculous. AP should be smart enough to simply state that.

How horrible. The AP is not just biased but is fudging the truth for the Messiah.

Power Line did the math and found that it would take approximately 11,308 years of tire inflation to equal the energy we can obtain by developing our own petroleum resources.

What’s really bad though, is that Paris Hilton is making more sense than Obama:

In the unkindest cut of all, McCain’s spokesperson Tucker Bounds tells TMZ that on the subject of energy, Paris is deeper than Barack. He says, “Sounds like Paris is taking the ‘All of the Above’ energy approach that John McCain has advocated — both alternatives and drilling. Perhaps the reality is that Paris has a more substantive energy plan than Barack Obama.”