A bomb killed at least 18 people, including nine soldiers, at a bus stop in the northern Lebanese city of Tripoli on Wednesday.

The bomb had been placed in a bag at the bus stop where soldiers usually gather, the army said in a statement, describing the attack as a “terrorist bombing” – a phrase used in the past by the military when it suspects militant Islamist involvement- Canada.com. 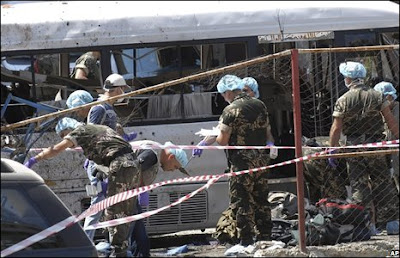 No group has yet claimed responsibility for the attack, but the city has recently seen clashes between the majority Sunni community and the Alawite sect, which is linked to Hezbollah. (BBC)

Experts determined the bomb was locally made and packed in a bag with nuts and bolts to maximize impact. It contained 3.3 pounds (1.5 kilograms) of high-explosive TNT and was triggered by remote control, security officials said –Naharnet.
No one has taken responsibility for the attack.

UPDATE: Somehow, some way, the Jews just got blamed for the attack.