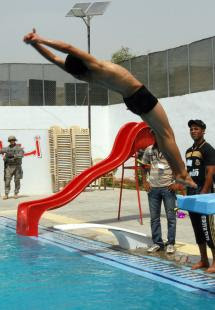 A young Iraqi does a backwards dive off the platform at the grand re-opening of the Mithaq Pool Complex, Aug. 30, 2008. The boy was competing in a diving competition to celebrate the pools opening. The pool complex is an important hub for recreation in the Thawra 1 neighborhood. (DVIDS)

The District Advisory Council and the residents of the Thawra 1 neighborhood of the Sadr City District of Baghdad celebrated the re-opening of the Mithaq Pool Complex with prizes, competitions and music, Aug. 30, 2008.

Representatives from the DAC, Ministry of Youth and Recreation, Iraqi army and community organized and oversaw the celebration, amid improved security conditions.

The festivities included guest speakers, a swimming and diving competition and swimming-related gifts for the younger Iraqis in attendance.

Iraqi Lt. Col. Yeayah Rosoul Abdallah al Zubadie, the commander of the 3rd Battalion, 42nd Brigade, 11th Iraqi Army Division, was a guest speaker at the re-opening and welcomed the attendees and thanked the many people who were involved in the important event.

“The Iraqi army is here to serve the people of Iraq. The community leaders here today, with the help of the Government, have a chance to make a difference for their people,” said Yeayah. “The re-opening today is an example of all of us together working together for our people.” 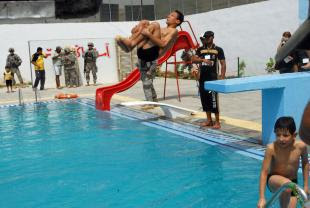 A young Iraqi does a front somersault off the platform at the grand re-opening of the Mithaq Pool Complex, Aug. 30, 2008. The boy was competing in a diving competition to celebrate the pools opening. (DVIDS)