The original article of this horrible war crime was published by the Regnum News Agency. 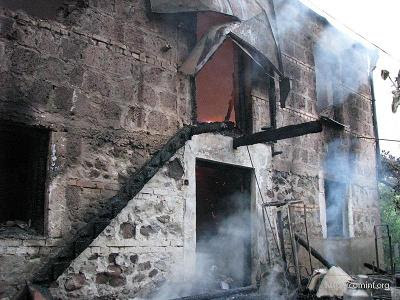 But, a photo report published by Regnum News from the village of Khetagurovo after bombing by Georgian forces does not show any pictures of a torched church.

Russia Today and The Daily Mail are repeating this horrific war story today:

The Regnum news agency is reporting that Georgian troops burned down a 10th century Orthodox church while terrified civilians perished inside. The agency quotes eyewitness accounts of the atrocity after all-out fighting in Khetagurovo, a small village near the republic’s capital Tskhinvali.

Almost all of those fighting to defend the village were killed, but the report says the fate of others, mostly women and the elderly, turned out to be even more horrible.

Eyewitnesses report that Georgian tanks literally ran people down and that soldiers took almost all the women to another location. Their fate is still unknown.

Meanwhile, those who didn’t manage to escape found their shelter in a 10th century Orthodox church. Civilians hoped that Georgians of the same faith wouldn’t dare storm the building, one of the oldest of its kind in the country.

But Regnum reports that the Georgian troops set the church on fire and left those inside to perish.

This story has not been verified.

Pravda said it was a house and not a church that was torched.