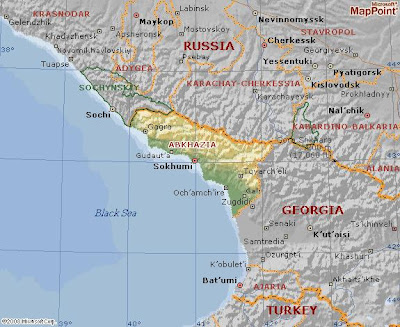 Ruslan Kishmaria, a separatist leader in the Georgian breakaway province of Abkahzia, mocked US Democrats and their tendency to cut and run yesterday as Georgian forces pulled out of the disputed province.
The AP reported:

Abkahzian separatist forces backed by Russian military might pushed out Georgian troops and even moved into Georgian territory, defiantly planting a flag.

“The border has been along this river for 1,000 years,” separatist official Ruslan Kishmaria told AP on Wednesday. He said Georgia would have to accept the new border and taunted the retreating Georgian forces, saying they had received “American training in running away.”

The developments came less than 12 hours after Georgia’s president said he accepted a cease-fire plan brokered by France. Russian President Dmitry Medvedev said Tuesday that Russia was halting military action because Georgia had paid enough for its attack last Thursday on the pro-Russian breakaway province of South Ossetia.

Is it really surprising that this rebel leader would mock the US?
After all, the Democrats have quite a “record of surrender” going for them.