CNN reported from the bombed out Georgian town of Gori today where President Saakahvili was forced to run for cover during the threat of a Russian air raid:

The Times Online reported that Russian armoured columns rolled deep into central and western Georgia, seizing several towns and a military base, President Saakashvili said that his country had been cut in half.

Georgian officials tonight claimed the country had been ‘overrun’ by Russian troops after a full-scale ground invasion.

Amid reports that Moscow forces had taken the town of Gori – and were marching on the capital Tsblisi – Georgian soldiers appeared to be in full retreat.

Troops were apparently in complete chaos as a full-scale rout pushed them back through the countryside.

Meanwhile, the civilian crisis intensified with thousands of refugees fleeing the seemingly unstoppable advance of the Russian army. 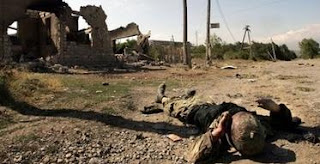 The body of a Georgian soldier lies on a street on the outskirts of Tskhinvali on August 10. Dozens of Russian warplanes staged new raids in Georgia. (AFP)

UPDATE: The New York Times is reporting that Russia has ordered a halt to military operations in Georgia on Tuesday.
Russia Today has video of Medvedev’s announcement.