FROM MILK TOAST INTERNATIONALIST TO BRAVE McCAIN-LIKE WARRIOR
…In under 24 hours.

Barack Obama released a meaningless statement yesterday after Russia began a bombing campaign inside Georgia, a staunch US ally:

Nowhere in Obama’s original statement did he exclusively condemn Russia but rather took the citizen of the world approach and left America’s ally Georgia to fend for itself.
Here is that statement:

“I strongly condemn the outbreak of violence in Georgia, and urge an immediate end to armed conflict. Now is the time for Georgia and Russia to show restraint, and to avoid an escalation to full scale war. Georgia’s territorial integrity must be respected. All sides should enter into direct talks on behalf of stability in Georgia, and the United States, the United Nations Security Council, and the international community should fully support a peaceful resolution to this crisis.” 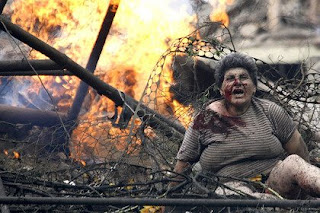 Russian planes bombed the town of Gori yesterday. A Russian warplane dropped a bomb on an apartment block in the Georgian town and killed at least five people. (Spiegel)

But, that was yesterday.
Now Politico is reporting that Barack Obama has released a fresh new statement and has decided to choose sides:

“I condemn Russia’s aggressive actions and reiterate my call for an immediate ceasefire… Russia must stop its bombing campaign, cease flights of Russian aircraft in Georgian airspace, and withdraw its ground forces from Georgia.”

Drew thinks someone must have looked it up and told Obama which side we are on.

UPDATE: Laika’s Last Woof suggests this for the next McCain ad:

“I don’t need to Google Georgia to know which side we’re on.” 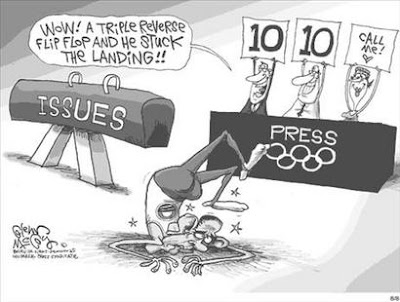 The liberal media hacks in the background are a nice touch.

More… Tom Maguire adds, “This is almost like watching “Follow The Leader”. Too bad it’s not a game.”