It looks like Michael Moore’s prayers to the great earth god were answered. 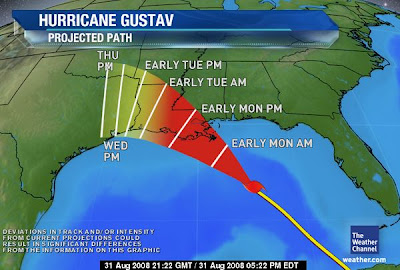 Weather.com
Don Fowler and other liberals will surely get a kick out of this…
The RNC Convention was cancelled for tomorrow night.
Chron Watch reported:

Virtually all of the Republican National Convention’s Monday night program, including an address by President Bush, will be canceled as national attention focuses on Hurricane Gustav, party officials said today.

“It is doubtful that there will be any kind of program tomorrow night” when the four-day convention was scheduled to commence, House Minority Leader John Boehner told reporters. “The convention is going to be handled on a day-to-day basis.”

Boehner, of Ohio, the top Republican in the House, said the convention is concerned about potential victims of the storm, “and the best way we honor that is to help Americans who are in need.”

“There will be efforts to engage the delegates, alternates and our friends in relief efforts.”

John McCain, who will formally receive his party’s nomination for the presidency, said today that the GOP is turning its focus on those who are facing the storm’s impact.

“I pledge that tomorrow night, and if necessary throughout our convention, we will act as Americans and not as Republicans, because America needs us now,” McCain said.

“We must redirect our efforts from the really celebratory event of the nomination of the president and vice president of our party to acting as all Americans,” he said.

There was a mandatory evacuation ordered from New Orleans today.
Our thoughts and prayers are with people on the Gulf Coast.

Glenn Reynolds says the news on Gustav is looking better.

And… Dan Fowler blamed the rightwing nutcase for his own disgusting remarks.