You won’t hear this in Denver this week…
Bush unemployment numbers continue to best the Clinton Years: 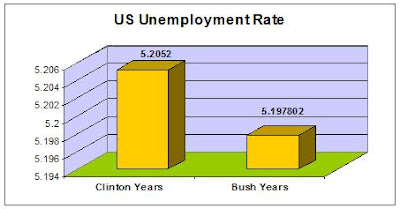 And, it looks like the recession is once again on hold.
The economy grew by a very respectable 3.3% in the second quarter of this year.
Yahoo Finance reported:

The economy shifted to a higher gear in the spring, growing at its fastest pace in nearly a year as foreign buyers snapped up U.S. exports and tax rebates spurred shoppers at home.

The Commerce Department reported Thursday that gross domestic product, or GDP, increased at a 3.3 percent annual rate in the April-June quarter. The revised reading was much better than the government’s initial estimate of a 1.9 percent pace and exceeded economists’ expectations for a 2.7 percent growth rate.

Also, according to the US Census Bureau, the poverty rate today continues to remain below those Clinton years: 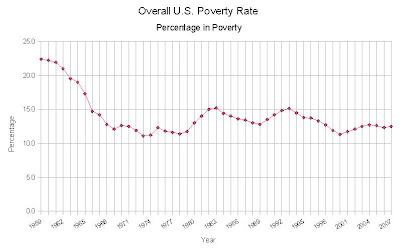 Bubba didn’t mention this in his speech here in Denver last night.

More… David Harsanyi explained today why it’s no wonder Dems didn’t want former President Bill Clinton to speak on the economy this week. The growth during the Clinton years was due to free market capitalism and not populism, or isolationism.