And, the pro-Clinton groups are spending money on advertising. 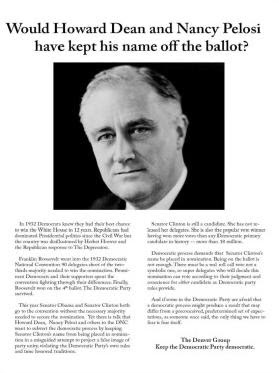 This print ad that ran in Congressional Quarterly showed a picture of Franklin Roosevelt and asked, “Would Howard Dean and Nancy Pelosi have kept his name off the ballot?”
Would they?
The Hill reported:

The disenchanted Democrats want to express their disappointment with the party’s presidential primary process.

The Denver Group, formed a couple of months ago by two Clinton backers, says it has filmed a television commercial and is looking to air it soon. The fledgling group adds that it has received such a strong response to its scheduled Aug. 26 reception in Denver that it had to book an overflow room.

Meanwhile, another pro-Clinton group called “18 Million Voices” is organizing a march on Aug. 26 in Denver “and nationwide to support Sen. Clinton and advocate for women’s rights worldwide.” It will also be holding “a celebration in a beautiful Denver City park during the day, and throughout the evening on Aug. 26,” according to the 18 Million Voices website.

Heidi Li Feldman, co-founder of the Denver Group, said, “There is going to be a steady stream of activities for the first three days of the convention” and predicted thousands of Clinton backers will appear at the events.

Feldman said her group has raised between $30,000 and $40,000, enabling it to buy six print ads and produce one television ad. The TV ad is scheduled to run on CNN and during a local news broadcast in Denver the week before the convention begins. The ad strategy for convention week has not been finalized.

As seen in the Chicago Tribune: 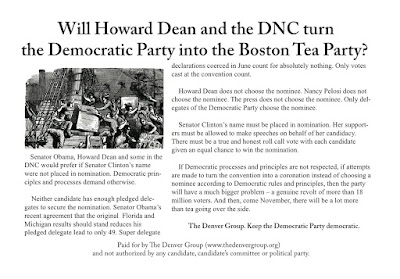 Click to Enlarge
The New Boston Tea Party ad by the pro-Hillary organization, “The Denver Group.”

It looks like Denver is shaping up to be a great bash.
Don’t forget to buy the popcorn, Nahanni.