So guess who’s really getting more from Big Oil?

The Voice In My Head came up with the graphic: 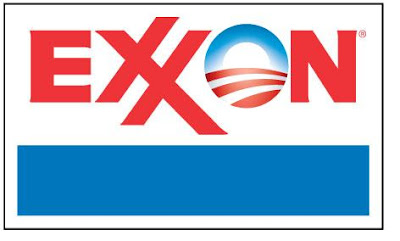 It seems to fit.

Much has been made of Barack Obama’s TV ad this week that accuses John McCain of being “in the pocket” of the oil industry, and yesterday the Democratic Party launched a website pairing McCain and Exxon Mobil as running-mates. While McCain has raised considerably more money from this unpopular industry, CRP was surprised to notice that it’s actually Obama who has received more from the pockets of employees at several of Big Oil’s biggest and most recognizable companies. Tallying contributions by employees in the industry and their families, we found that Exxon, Chevron and BP have all contributed more money to Obama than to McCain.

FactCheck.org reported on the political donations from oil companies this year:

It’s true that Obama doesn’t take money directly from oil companies, but then, no presidential, House or Senate candidate does. They can’t: Corporations have been prohibited from contributing directly to federal candidates since the Tillman Act became law in 1907.

Obama has, however, accepted more than $213,000 in contributions from individuals who work for, or whose spouses work for, companies in the oil and gas industry, according to the Center for Responsive Politics.

Here’s a chart (it might be outdated) of oil money to Obama: 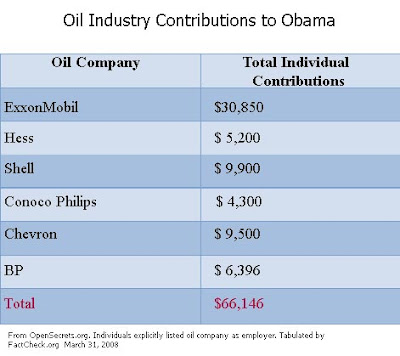 Oh well.
It’s not like the media will report this.
It’s one of the perks of being the Messiah.

More… Jake Tapper says “Exxon Hearts Obama”.
This did not make the headlines.