The primary season may be over but the feuding is not.
Angry Obama supporters are lashing out at the “bitter enders” from the Hillary Campaign. 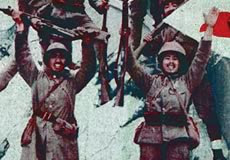 The Obama backers are angry at the Hillary supporters and say they are acting like “Japanese soldiers in the South Pacific still fighting after the war is over.”
That’s one way to unite the party.
The Politico reported:

After a period earlier this month when the two sides were working collegially over strategy, scheduling, and other convention logistics, things turned scratchy again in recent days.

Some senior Obama supporters are irritated at how they perceive the Clintons fanned — or at a minimum failed to douse — stories that she was not even vetted as a possible vice presidential nominee. This is because she told Obama she preferred not to go through the rigorous process of document production unless she was really a serious contender, an Obama associate noted.

One senior Obama supporter said the Clinton associates negotiating on her behalf act like “Japanese soldiers in the South Pacific still fighting after the war is over.”

A prominent Obama backer said some of Clinton’s lieutentants negotiating with the Obama team are “bitter enders” who presume that, rather than the Clintons reconciling themselves to Obama’s victory, it is up to Obama to accommodate them.

In fact, some senior veterans of Clinton’s presidential campaign do believe this.

“He has not fully reconciled,” said one political operative close to the Clintons, “and he has not demonstrated that he accepts the Clintons and the Clinton wing of the party.”

Today it was announced by the Democratic Leadership that Michigan and Florida will be given full voting rights at the national convention despite holding their primaries early this year.
This was after Hillary pulled out of the race in June because the delegates for each state were cut in half.
Amazing.