Not your typical cheese-eating surrender monkey–
French President Nicolas Sarkozy will not cut and run after the deaths of 10 French soldiers today. Four soldiers were killed after being captured by the Taliban.
Sarkozy committed to continue the fight against terrorism.

French President Nicolas Sarkozy is travelling ot Afghanistan tonight after 10 French soldiers were killed in an attack by the Taliban on Tuesday.
Despite the fact that two-thirds of France is opposed to French involvement in the conflict, Sarkozy says he will not cut and run and is committed to fight against terrorism.
The BBC reported:

President Nicolas Sarkozy is travelling to Afghanistan to support French troops a day after one of the deadliest attacks on French forces abroad.

Ten French soldiers were killed and 21 injured in an ambush by Taleban fighters east of the capital, Kabul.

Mr Sarkozy said France was committed to the fight against terrorism, and the mission in Afghanistan would continue.

France plans to send in 700 troops by the end of August, bringing its presence in Afghanistan to 2,600.

The French news agency AFP reported that Tuesday’s deaths brought to 24 the number of French troops killed in Afghanistan since 2002.

The BBC’s Emma-Jane Kirby, in Paris, says news of the deaths will provoke anger in France, where two-thirds of people say they are opposed to French involvement in the conflict.

The loss of life is thought to be the heaviest suffered by the French military since 58 paratroopers were killed in Beirut in 1983.

Mr Sarkozy said he was travelling to Kabul to assure French troops “that France is at their sides”.

In a statement, he said France had “been struck severely” but that France was “resolved to pursue the fight against terrorism, for democracy and liberty”. 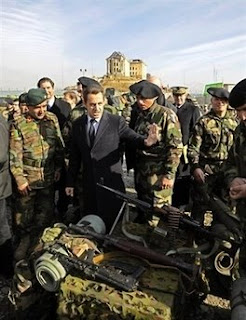 You’ve got to hand it to Sarkozy– If he were a Democrat he would have had the French troops yanked by now and he certainly would not be on a plane heading to the war zone.