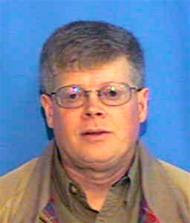 Timothy Dale Johnson was fired from a Target Store yesterday for writing graffiti on a wall. He then drove 30 miles to shoot the Arkansas Democratic Party Leader. (KATV photo)

The AP has more on Timothy Dale Johnson the shooter in yesterday’s tragic murder of Bill Gwatney. They describe Johnson as a loner who lived in his parent’s home and was never married. Both of his parents died within the last 10 years.

The AFP has this on the story:

Bill Gwatney, 48, was shot multiple times in the upper body and died shortly afterward at the hospital, police said.

His assailant, 50-year-old Tim Johnson, was fatally shot after a police chase into a neighboring county.

He had no criminal record and had reportedly been fired earlier that morning from his job at a Target store, but it was unclear if or how he knew Gwatney, according to local news reports.

Police were called to a Target store in Conway, about 25 miles north of Little Rock, early Wednesday after coworkers complained about an agitated employee who had been fired for writing graffiti on a wall, the Arkansas News said.

The employee, Johnson, was “very agitated and shaking, and they feared for their safety,” said Conway police spokeswoman Sharen Carter, who added that Johnson had departed by the time police arrived.

Lieutenant Hastings said the motive for the shooting was unclear.

UPDATE: Nahanni found this from Todaysthv:

Today’s THV has learned from an anonymous source that worked with 50-year-old Timothy Dale Johnson at the Conway Target that Johnson’s rage started around 7 a.m. Wednesday.

Johnson’s co-worker says graffiti laced with curse words concerning a hallway were found by management. The graffiti said, “This hall is too *** **** narrow.”

Store managers called a meeting. We’re told they asked if whoever wrote the graffiti to step forward and admit it and he or she wouldn’t be fired. Our source says store management later found the same graffiti signed and dated by Johnson.

Over the next hour or so, Johnson’s co-worker says he wrote on a door and another hallway again with objectionable words. “Target is run by dumb jocks and sorority *******.”

A third graffiti was found on the human resources door saying, “sorority *******.” Our source tells us that management talked with Johnson and then Johnson stormed off and left the building.

Conway police tell Today’s THV they were called to Target around 8 a.m. about a disgruntled employee. When police arrived Johnson had already left.

There is still no motive for the shooting.

He was a bitter nut.

Police are exploring possible links between the Arkansas Democratic Party chairman who was gunned down in his office yesterday and his killer.

The victim, Bill Gwatney, was fatally shot by Timothy Dale Johnson, who was then killed by officers after a 30-minute chase.

Authorities say a search of the dead gunman’s home turned up 14 guns, antidepressants, his last will and testament and a Post-It note that bore his victim’s last name and a telephone number.