My, they sure are having a difficult timing attacking this pro-gun, pro-Life, conservative mother of 5 who enjoys an 80% approval rating as Governor of Alaska. 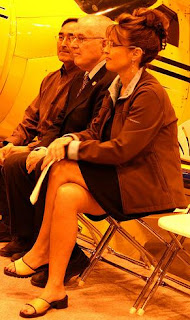 (Flickr)
The latest lib smear is that Palin did not oppose the “Bridge to Nowhere”.
The Left is already starting to lie about Sarah Palin.

But, sadly, it is the Left, once again, who is lying.
They have such a difficult time with reading comprehension.
Here is what the Anchorage Daily News reported today:

“I told Congress, thanks but no thanks on that bridge to nowhere,” Palin told the cheering McCain crowd, referring to Ketchikan’s Gravina Island bridge.

But Palin was for the Bridge to Nowhere before she was against it.

The Alaska governor campaigned in 2006 on a build-the-bridge platform, telling Ketchikan residents she felt their pain when politicians called them “nowhere.” They’re still feeling pain today in Ketchikan, over Palin’s subsequent decision to use the bridge funds for other projects — and over the timing of her announcement, which they say came in a pre-dawn press release that seemed aimed at national news deadlines.

…McCain also claimed to have found, in Palin, “someone with an outstanding reputation for standing up to special interests and entrenched bureaucracies” and “someone who has fought against corruption and the failed policies of the past” and “someone who has reached across the aisle and asked Republicans, Democrats and independents to serve in government.” On those scores, Palin can fairly claim credit, according to Alaska political leaders and others who have followed her career here.

She did fight corruption as a whistle-blower, even before an FBI investigation burst into public view. She also stood up to “party bosses,” as McCain claimed, running against Republican incumbents as an outsider — though she has yet to unseat her nemesis, Randy Ruedrich, as state party chairman.

Palin spokeswoman Sharon Leighow said Saturday that as projected costs for the Ketchikan bridge rose to nearly $400 million, administration officials were telling Ketchikan that the project looked less likely. Local leaders shouldn’t have been surprised when Palin announced she was turning to less-costly alternatives, Leighow said. Indeed, Leighow produced a report quoting Palin, late in the governor’s race, indicating she would also consider alternatives to a bridge.

There you have it.
Sarah Palin opposed the “bridge to nowhere”.
It’s so sad to see the Left stoop to deceit in order to discredit the popular Palin.

They are having such a difficult time bashing this woman and mother.
It’s really too bad.