Kobe Bryant tells liberal NBC host that its OK to be patriotic and support your country. 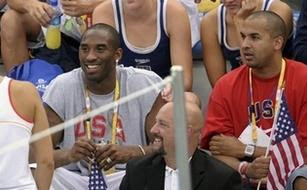 Kobe Bryant at the swimming competitions in Beijing with his American flag.

Collinsworth asked Kobe about what it felt like when he first got his U.S.A. uniform, and how he felt about representing the United States of America…
And, is it really “cool” to be proud of your country today?

** MsUnderestimated has the must see video HERE.

Collinsworth: Tell the story when you first got your USA uniform.

Kobe: Well I had goosebumps and I actually just looked at it for awhile. I just held it there and I laid it across my bed and I just stared at it for a few minutes; just because as a kid growing up this is the ultimate, ultimate in basketball.

Collinsworth: Where does the patriotism come from inside of you? Historically, what is it?

Kobe: Well, you know it’s just our country, it’s… we believe is the greatest country in the world. It has given us so many great opportunities, and it’s just a sense of pride that you have; that you say “You know what? Our country is the best!”

Collinsworth: Is that a ‘cool’ thing to say, in this day and age? That you love your country, and that you’re fighting for the red, white and blue? It seems sort of like a day gone by(?)

Kobe: No, it’s a cool thing for me to say. I feel great about it, and I’m not ashamed to say it. I mean, this is a tremendous honor.