You may want to cancel your next trip to Iran– unless you pack some black sheets.
The regime in Iran beat and arrested several tourists this week for ignoring the strict dress code.
ROP and NCR-Iran reported:

Last week six women and a man touring the southern city of Shiraz were beaten and arrested. The State Security Forces (SSF) – mullahs’ suppressive police – Chastity Unit patrolling the streets stopped a group of East Asians touring the city for not observing the strictly imposed dress code. Not having a translator, the group resisted the SSF agents and was severely beaten and arrested.

The Asian tourists then spent a few hours at the SSF custody before finally being released by their country’s embassy.

This was not an isolated incident of the kind. In the past year there have been tourists harassed by the SSF enforcing the dress code in line with the suppressive “boosting public security plan.”

Funny… They didn’t have any photos of this at the pro-Iranian regime silk mosque set up in Denver this week. 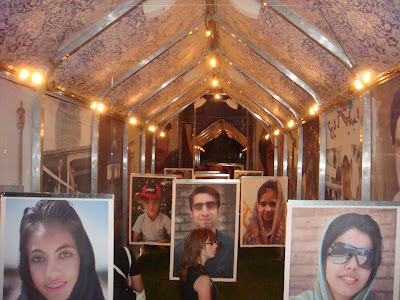 They skipped the a$$ washer photos, too.