Unlike Barack Obama…
Alaska Governor Sarah Palin took the time to visit the troops at Landstuhl Base in Germany. 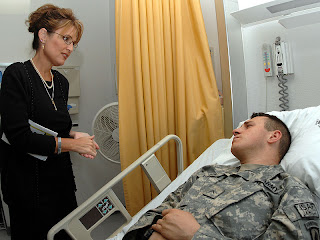 Palin has been to Iraq as many times as antiwar Democrat Barack Obama.

News Channel 7 in Denver was caught on air attacking Palin and McCain.

Sarah Palin’s husband Todd is no panty-waist, either.
He’s won the most grueling snowmobile race in the nation.
LGF Quicklinks and Anchorage Daily News reported:

It was mid-February and Todd Palin, Alaska’s newest first gentleman, was speeding across 2,000 miles of ice and snowy tundra en route to victory in the world’s most grueling snowmobile race.

That same week, his wife, Gov. Sarah Palin, was in Juneau requesting more money for the state budget and assuring legislators they’d soon see her plan for a natural gas pipeline that could one day be the most expensive construction project in North America. Then she flew to Fairbanks to wave her exhausted husband across the finish line.

It’s not just his title as the state’s reigning snowmobile co-champion that sets 42-year-old Todd Palin apart from the nation’s other first spouses. And it’s not that he’s one of just five who are men.

White-collar jobs in law, education or health care are typical among the current crop of first spouses, but Palin spent nearly 20 years as a blue-collar employee in the oil fields of the North Slope. And every summer he heads west to his birthplace in Dillingham to work the Bristol Bay commercial salmon fishery from his property on the Nushagak River.

A lifetime of manual labor in the state’s two largest and most physically demanding industries is helping Palin carve out his role as Alaska’s first spouse, or “first dude,” a nickname he has in common with the Kansas governor’s husband, Gary Sebelius.

Like other first spouses around the country, Palin has been asked to champion an array of causes or institutions since his wife took office in December.