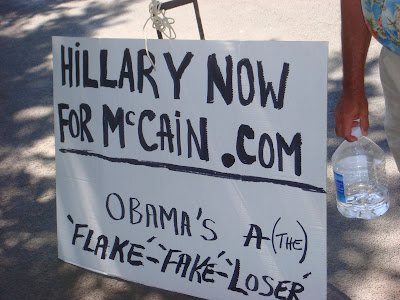 President of the United States Bill Clinton was impeached by the House of Representatives on December 19, 1998, but that didn’t stop the Democrats from giving him a top speaking slot in the convention this year.
Tonight Bubba addressed the nation.
Stephen Green liveblogged at Pajamas Media, via Glenn.
It was a nice touch that they played “Addicted to Love” after his talk.

Later Joe Biden spoke too long and bashed McCain– the man he’d be honored to run with.
He also confused battalions with brigades.

And, the surprise guest was none other than… The Messiah!
Colin Powell must have declined.

The McCain Camp responded to Biden’s attacks, via The Corner: