But, don’t worry…
Despite the fact that this Egyptian who entered into the US on a Sudanese passport, built a drone airplane capable of carrying 600 pounds of explosives, tested the drone at night (Video Here), on a runway, officials believe he has no ties to terrorism. 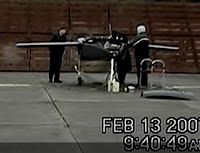 They were just out having a little fun. (WNBC)
WNBC of New York Cty reported:

An unmanned drone being built by an engineer on Long Island sparked a large counter-terrorism investigation across the New York area, officials tell WNBC.com. Police said they had stumbled upon overnight testing of the drone at a little-used airstrip in Calverton, Long Island.

The investigation began in February of last year, when investigators first learned testing of the drone was underway. Officials said the drone was being designed to carry more than 600 pounds of explosives.

“It could be in the air for 8-10 hours and there’s potential harm if it is carrying a large amount of toxic material,” NYPD Commissioner Raymond Kelly said in explaining why his department’s counterterrorism officials were concerned.

Police surveillance video obtained by News 4 New York shows a white van rolling onto the tarmac, a small group of men jumping out and ground testing the unmanned flight vehicle.

…NYPD officials worked with Suffolk County police and the FBI to determine there were no ties to terror.