Hurricane Gustav is threatening to delay the RNC Convention next week in Minnesota. 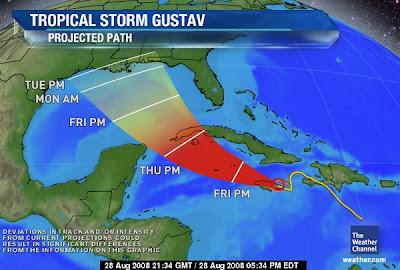 Mindful of the pitfalls of hosting cocktail parties while Gulf Coast residents are being evacuated, John McCain’s campaign suggested Thursday that Republicans could postpone their upcoming national convention in St. Paul if Tropical Storm Gustav makes landfall over the weekend.

Accu-Weather storm trackers say nothing is impeding Gustav from turning into a hurricane before it makes landfall in the United States. Maximum sustained winds could reach 111 miles per hour.

“The storm poses a serious threat to lives and property next week along the Gulf Coast. All interests from the Florida Panhandle to South Texas should closely monitor the storm, prepare an emergency plan and stock up on supplies,” the weather agency wrote in a statement early Thursday afternoon.

Louisiana Gov. Bobby Jindal has already said he would skip the convention, scheduled to start Monday and last through Thursday, if a hurricane barrels down on New Orleans and the Gulf Coast just days after the third anniversary of Hurricane Katrina.