While Democrats are vacationing… 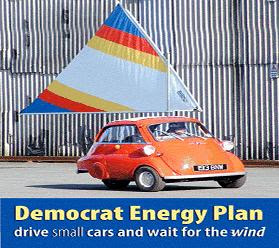 …House GOP members are protesting against the Democratic Party’s block on US energy development and drilling.

The House GOP leaders called in reinforcements for their energy protest today and say they could carry the revolution up until the start of the DNC Convention!
The Hill reported

In an e-mail sent to House Republican aides on Tuesday, the office of Minority Leader John Boehner (R-Ohio) stated, GOP Leadership in the House is requesting that all Republican Members join in the debate at some point this week, beginning at 10:30 a.m. Wednesday, 11:00 a.m. Thursday, and 10:00 a.m. Friday. We hope to finish the week as strong as we started.

Leadership officials said they see no foreseeable end to the protest that began as an impromptu series of floor speeches after the House officially adjourned last week. And after three days of a handful of rank-and-file members holding down the fort, Minority Whip Roy Blunt (R-Mo.) and House Republican Conference Chairman Adam Putnam (R-Fla.) are expected back in town Wednesday, when they will meet with former Speaker Newt Gingrich (R-Ga.) to discuss strategy before taking to the floor to resume the protest.

Michael Steel, a spokesman for Boehner, said they have enough commitments from members to carry them through Friday. Aides say the mock sessions of Congress could last up until the Democratic convention, which begins Aug. 25.

Meanwhile… A US GOP House Leader, Thaddeus McCotter (R-Mich.), blasted “Beijing Bush” on Tuesday for not calling Congress back into session to deal with the national energy crisis.
The Hill, via Instapundit, reported

A House Republican leader is lambasting President Bush on his decision not to call Congress back into session to deal with the energy crisis.

In a legislative update sent to GOP members and staff on Tuesday, Republican House Policy Committee Chairman Thaddeus McCotter (Mich.) accused “Beijing George” Bush of throwing House Republicans “under the bone-dry bus” on his way to the Olympics in China.