You may write me down in history
With your bitter, twisted lies,
You may tread me in the very dirt
But still, like dust, I’ll rise.

There may be hope for the Democratic Party, yet.
As Obama continues to tank in the polls with even the New York Times wondering if this is it for Obama or any black candidate in the future, Hillary supporters remain devoted to their woman. 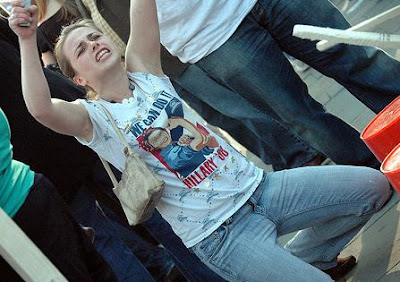 (Flickr)
Hillary Supporters are planning a major parad and rally at the DNC Convention later this month in Denver.
They want a vote at the convention and they want to vote for their nominee.
The Rocky Mountain News reported:

Hillary Clinton supporters will march through Denver during the Democratic National Convention to show appreciation for the New York senator’s historic primary run and urge the party to place her name in nomination.

The city issued a permit Tuesday to Colorado Women Count/Women Vote for a parade on Aug. 26 – the 88th anniversary of women’s suffrage and the date Clinton is rumored to be speaking at the DNC.

The group also will team with 18 Million Voices, a national organization of Clinton supporters, for a rally in a yet-to-be-determined Denver park.

“We just want to celebrate Hillary’s accomplishments and what she’s done for the country as a whole and women in particular,” said Katherine Vincent, 55, of Louisville, who is organizing the parade and rally.

Vincent is among those passionate followers who believe Clinton’s delegates have a right to vote for her at the convention.

“That’s why they were selected,” she said. “We think it would actually bring the party together.”