“John McCain says that Americans are supporting Georgia. We are Georgians today. Everybody is a Georgian today.”

It’s obvious to those nations who suffered under the Soviet boot who they trust to help protect them from the Russian threat.
President Saakashvili singled out John McCain for his support of Georgia today at a massive rally in Tbilisi. The crowd roared!

Hat Tip Bill Nelson and HotAir
Saakashvili was joined by the leaders of Estonia, Poland, Ukraine and Latvia today for a massive freedom rally in Tbilisi. 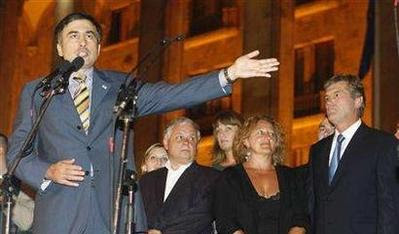 100,000 Georgians turned out for the massive freedom rally.
AFP reported, via Instapundit:

In a show of defiance to the Russian attacks, 100,000 people packed the main Rustaveli avenue of Tbilisi, where a sea of red-and-white Georgian flags waved above the crowds.

President Mikheil Saakashvili told a rally that Georgia would quit the Russian-led Commonwealth of Independent States (CIS), a grouping of former Soviet states, and urged Ukraine to follow suit.

Georgia has received strong support from other former communist states with the leaders of Ukraine, Poland and the Baltic states travelling to Tbilisi where they addressed a mass rally.

“You have the right to freedom and independence. We are here to demonstrate our solidarity … freedom is worth fighting for,” shouted Ukrainian President Viktor Yushchenko in live pictures carried by Georgian television.

Power Line has more McCain leading the way.
Barack Obama’s waffling did not impress the crowd.