“When we were in Africa, we didn’t know what was there for us as kids–we just ran. God was planning all of this stuff for me, and I didn’t know. Now I’m using running to get the word out about how horrible things were back in Sudan during the war. Sometimes these things are not on CNN, so if I put out the word, I hope people can get the information. Right now, similar terrible things are going on in Darfur; people are running out of Darfur, and I put myself in their shoes.” 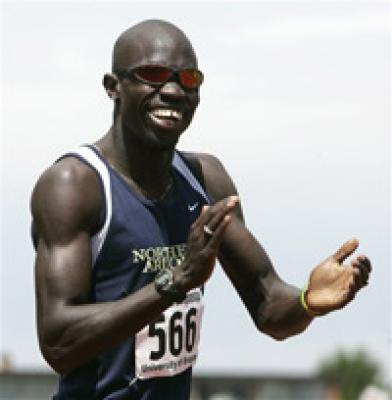 Lopez Lomong will run the 1500 meter race at the Olympic games.
All three Americans in the 1,500 are naturalized citizens—Lomong, Bernard Lagat (Kenya) and Leo Manzano (Mexico).
This biography is from the Lopez Lomong website:

Lopez will compete for the U.S. Olympic team in Beijing this summer. As a Sudanese refugee, Lopez provides a unique perspective on the crisis in Darfur and frequently speaks out about the need to raise awareness about the genocide because “a lot of people here don’t know what was going on in Sudan and I need to send a message as an athlete from Sudan.”

Lopez speaks from experience about what it is like to be separated from home and family. At age 6, he was abducted from a Sudanese church by a militia faction that wanted to turn young boys into child soldiers. He eventually escaped the militia camp through a hole in a fence with three older boys who carried them on their backs as they walked for three days until they reached Kenya, where police arrested them and sent them to a refugee camp. He spent 10 years in the camp, living on one meal a day.

Lopez learned of a program that sought to relocate 3,500 refugees to the U.S. After an interview with a U.S. embassy official, Lopez resettled with a family in New York and attended Northern Arizona University where he began to pursue his Olympic dreams. Now a member of the U.S. Olympic team, Lopez realizes his unique opportunity as an elite athlete to spread awareness about the crisis in Darfur. “As athletes, we need to send the message to the government not to kill or bomb and to China to stop because those guns are not to defend the country, but to kill innocent people. This is the 21st century. We don’t want kids growing up in refugee camps like I did.”

Lopez Lomong was chosen by his fellow American teammates to carry the US flag into the Olympic Stadium in Beijing.

Related… Each day from now through the closing ceremonies of the Olympic Games in Beijing democracy activist and author Bridget Johnson will be featuring a “Dissident of the Day” on her Rocky Mountain News blog to highlight what China has done in a vain attempt to present such a “clean,” dissent-free face to the world.

UPDATE: (Friday AM) The WaPo has more on Sudanese refugee Lopez Lomong.