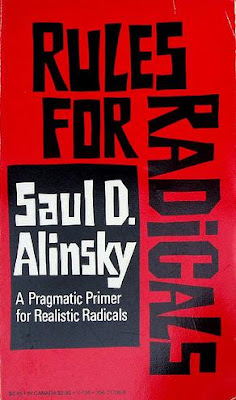 “Barack stood up that day,” talking about a visit to Chicago neighborhoods, “and spoke words that have stayed with me ever since. He talked about “The world as it is” and “The world as it should be…”

Here’s an excerpt from Chapter 2 of Saul Alinsky’s book, Rules for Radicals:

“The means-and-ends moralists, constantly obsessed with the ethics of the means used by the Have-Nots against the Haves, should search themselves as to their real political position. In fact, they are passive — but real — allies of the Haves…The most unethical of all means is the non-use of any means… The standards of judgment must be rooted in the whys and wherefores of life as it is lived, the world as it is, not our wished-for fantasy of the world as it should be.“

It’s just a guess but maybe she heard it at church?

UPDATE: Maybe it wasn’t anti-semite Wright… Maybe it was Barack who came up with the Alinsky quotes.
It appears Barack Obama was hired by an Alinsky protege back in his days as a community organizer.
Figures.